“Show me someone not full of herself and I’ll show you a hungry person.” 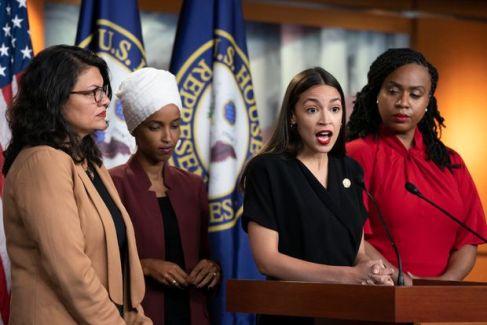 Up-pi-ty. Meaning: Arrogant. Self-important. Presumptuous. The word comes from the late 19th Century, right after the Civil War, during the Reconstruction period and the beginning of the rigid Jim Crow racial segregation laws in the Deeper South.

It began as a description Black people used for other Black people they perceived as acting snobbishly towards them, as if they thought they were better than the rest of the race. Then white people started using the word to connote Black people who “didn’t know their place,” who refused to be subservient to whites, who, in fact, behaved as equals.

Seemingly, the 21st Century version of “uppity” is people of color who talk back to the un-president; who defy his cruel executive orders on immigration, social safety net programs, the LGBTQ community, and just about anything else he supports. Apparently the un-president considers  the four most outspoken Congresswomen of color — Reps. Ilhan Omar (D-Minn,), Alexandria Ocasio- Cortez (D-NY), Ayanna Presley (D-Mass.) and Rashida Tlaib (D-Mich.) — as the most “uppity” of all of his critics, and he can’t STAND them. How dare these women of color in Congress say anything against HIM! Who do they think they are?

And so the un-president began a prolonged attack on the women via his  tweets. He accused, or implied, that the women were unpatriotic, un-American, and (GASP!) SOCIALIST!  And not only that, THEY AREN’T EVEN WHITE!!!

Meanwhile, Repugnantthugs and their various spokespeople are tying themselves up in knots trying to explain on the public affairs talking heads TV shows how the un-president’s tweets were NOT racist. What he was attacking, they’ve said, was the women’s supposed far left, extremist political views, lack of patriotism, and, tacked on as a last minute charge, anti-semitic (that one was mostly directed at Rep. Omar because she’s a Muslim).

But People of color, especially Black people, see through the un-president’s lies. We know his history of bad-mouthing people of color and women he can’t control. Before the “Squad,” he called out Rep. Omar for her statements which allegedly backed Islamic terrorist groups (which she didn’t). Before that he went after Sen. Elizabeth Warren (D-Mass.) for claiming to have some degree of Native American ancestry (she does, according to her DNA test results), and he derisively called her “Pocahontas” after the 17th Century Native American princess. Before and during the 2016 Presidential election campaign, he slandered former Secretary of State and Democratic Presidential candidate Hillary Rodham Clinton,  calling her a “crook” (with no evidence of such).

Elections are part of the reason for the un-president’s lies, verbal and written attacks against the four female, politically progressive U.S. Representatives of color. He’s running for re-election, and he knows that his voting base is just as racist as he is, as well as frightened of intelligent, articulate, highly educated people of color — especially women of color with those characteristics.  Women like that will not stand for his bullying and name-calling, his deliberate misinterpretation of their political views.

Reps. Ocasio-Cortez, Pressley, Omar and Tlaib are doing their level best to draft and pass legislation for which their respective constituents elected them. The un-president’s antics are like an annoying housefly, making a lot of buzzing sounds and flying around but creating nothing. These Representatives will serve their voters, and all Americans, regardless. It’s what “uppity” people do.