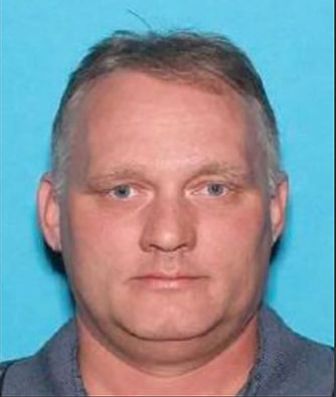 I was listening to a local radio station in my car last Saturday when the “breaking news” was broadcast: An unidentified gunman had shot up a Jewish religious gathering, killing and wounding several people. Another “breaking news” story aired about 20 to 45 minutes later which said police had apprehended the suspect, Robert Bower (pictured).

“What’s his race?” I muttered under my breath to myself. “What is he?

When I was safely able, I scrolled through national news on my cell phone. The police had announced the suspect’s name. I looked for any photos of the man, and finally there is was. Robert Bower.  White.

I felt so relieved. And relief in learning that someone associated with gun violence resulting in casualties isn’t something unexpected in the Black community. History has taught us that any violence where white people are murdered and the suspect has not been identified yet, means the white gaze will focus on Black folks or other people of color. And that could mean danger for the Black community.

I remember other instances when I was growing up that involved national news stories about mass murders and my mom, or friends’ parents, were heard to say, “At least he wasn’t Black.” Throughout the nation’s history, crimes said to involved Black perpetrators and white victims galvanized white communities into attacking random Black people, whether they had anything to do with the crimes or not. Especially in the Deep South, there were stories of self-appointed white vigilantes, often the Ku Klux Klan, coming for someone they thought was the suspect.  If they had a name, the person was likely to be dragged out of his home, with his wife and family helpless to protect him as they watched, screaming and crying. The person wouldn’t last the night. The next morning, the person’s body would be found hanging at the end of a rope, the other end of said rope tied to a tree limb. The lynching served as a warning to the rest of the community: This could be you. Watch yourself.

The most infamous case of vigilante “just us” in the 20th Century was that of Emmett Till, the young Black teenager who was beaten to a pulp, and whose body was thrown into a Mississippi river by a group of outraged white men for supposedly wolf-whistling at a white woman. Decades later, the woman in the incident admitted that she had lied, and Till was innocent.

The “just us” attitude arose again after the terror attack on the World Trade Center Twin Towers, the Pentagon, and a commercial airplane. Anyone walking down any city street wearing a turban or otherwise “looking Arab” could be accosted and beaten by any whites as revenge for the terrorist attacks.  At least then, there was a President who said in a nationally broadcast statement that not all Middle Easterners are terrorists, and we should all unite against terror because those who committed the 9-11 acts wanted to divide Americans.

But today’s “leadership” loves to amplify racism, especially during election season. As we head into the midterm elections, Repugnantthugs have adopted a not-so-new strategy of blaming the nations’ ills on Central American immigrants, those men, women and children who have risked everything to walk hundreds of miles on foot to get away from gang and political violence in their home countries. They are merely seeking asylum in the U.S. once they cross into Texas from the Mexican border.

But taking a page from their hero, the unpresident, Repugnantthugs running for seats in the U.S. House and Senate are painting these refugees as potential terrorists and criminals, a ploy they hope will generate so much fear and panic among white voters that they view such candidates as the only thing standing between them, whites, and certain mayhem and murder.

Two glaring examples of how to use fear and hate politically are the campaign TV and radio ads of Repugnantthug Corey Stewart, who is running against Virginia’s incumbent U.S. Senator Tim Kaine, a Democrat. The fear-mongering ads call Democrats the party of “mob rule” that “dishonors our flag,” “raises our taxes” and “ridicules our traditional beliefs.”

Stewart claims Democrats want to “open our borders” to Central American refugees, who he describes as wild and uncontrolled criminals who will “assault our daughters, murder our sons, and sell drugs.” Shades of the early 1900s movie “The Birth of a Nation,” in which Black men were depicted as animal-like criminals bent on sexually assaulting all white women!

But playing to fear and racism apparently remain effective in politics. as well as inspire hate crimes. That’s why we’re seeing more unprovoked attacks and harassment of Black people and other people considered “minorities.” It was behind the shootings in Jeffersontown, Kentucky this weekend, where Gregory Bush, a white man, shot two Black people in a Kroger’s grocery store. Before that he allegedly tried to enter a Black church and murder its occupants.

The heightened fear and racism rests squarely at the feet of the Repugnantthug Party members and its nominal “leader,” the unpresident, who have been scapegoating people of color and praising white nationalism ever since 2016 when the party won both houses of Congress and the unpresident began his four years in the White House. I hope that in November, white voters wise up, stop falling for candidates who fan the flames of unfounded fear and racism, and vote intelligently. Otherwise, people of color in particular will have to continue to cringe whenever some unbalanced individual shoots up a shopping mall,  movie theater, grocery store or church, and worry about the implications for their families and communities if the unidentified perpetrator turns out to be “one of us.”  And we’ll then hope that white reaction to the crime isn’t “mob rule.”