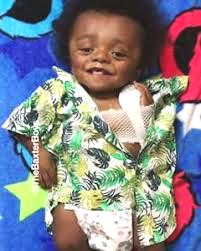 I don’t know if this is typical for women of a “certain age.” But lately I get all gooey and mushy whenever I see a cute baby or toddler. A toddler like Byron Baxter, the three-year-old superstar of social media who lives with his family in Lawrenceville, Georgia.

Byron personifies cuteness overload. Like most toddlers, he’s a ham in front of a camera. Any camera. A camera in a phone will do. He giggles, wiggles and “dances” lying on his back in his bed, or when he’s propped up in his stroller or high chair. He tells his million or more “cyber uncles and aunts” “I love you!” and “Happy (whatever day of the week)” and smacks his lips to make kissing sounds to his supporters. He’s become so social media savvy that in one YouTube video he told his mom, “I want Snap Chat on my face!”

Besides the YouTube channel, Byron’s parents, Ebonie and Byron, set up a Facebook page and an Instagram account, where his fans can view his activities, those of his parents, and his little brother Blake.

One would never know to look at Byron’s cheery little face that sometimes he’s in pain due to bone fractures.

Byron has osteogenesis imperfecta, or “brittle bone disease.” It’s a genetic condition that cuts across ethnicity and gender. It’s so rare that it effects an estimated 20,000 to 50,000 people in the U.S. It’s characterized by defective genes which can’t produce enough collagen, the protein that comprises the connective tissue around bones.

It can also affect teeth, making them brittle and easily broken.

What it means for kids like Byron is multiple fractures from making the slightest movement. He has been so fragile that he could easily fracture the bones in his hand by waving it.

Until recently, Byron didn’t wear socks, because his parents were afraid they would accidentally break his legs as they put his socks on. But recently they gave it a try, and Byron was recorded showing off his new black and white striped socks.

There is no cure for osteogenesis imperfecta.  There are ways to lessen its effects, or to prevent so many bone fractures. There is bone infusion, in which a bisphosphonate drug is administered intravenously to prevent bone loss. Byron underwent the procedure in a hospital this August.  A month later, Byron can roll over on his stomach, and sit in high chair for ten minutes. He hasn’t experienced any bone fractures. At some point he can go to the hospital to have stainless steel rods implanted in his legs which will help strengthen them so he can walk.

Physical therapy would be helpful, but it’s expensive. Instead, Byron’s mother developed her own therapy: Placing toys and other articles slightly out of reach so that Byron has to stretch his arms to pick them up.

Like many Black parents who have children with disabilities, Ebonie and Byron can’t afford all of the costly medical expenses, and their health insurance doesn’t cover them. A friend of the family started a Go Fund Me page earlier this year which raised $91,395 from 3,391 people in four months. The fundraising goal was $70,000. The page is no longer taking donations.

Neither Byron nor his family treat his life as an unending tragedy, because it isn’t. He has a good time doing things that children do: Eating potato chips, playing games with his parents and Blake, swinging on a specially made swing in the family’s backyard, “sailing” on a plastic floatie in a pool, and having his mom spray him with water as he sits in his stroller on hot days.

While the Go Fund Me page is inactive, Byron’s parents say he still needs “care packages” of clothes, toys and books. He wears size 4T clothing in bright colors. He likes any toy he can hold. “Care packages” can be sent to The Baxter Boys, c/o of Ebonie Baxter, P.O. Box 464849, Lawrenceville, Georgia 30042. The family’s business email account is TheBaxterBoys@hotmail.com. The Instagram account is @TheBaxterBoys.

Love this little boy. It takes a mighty kid to giggle and smile through a challenging  disability. He’s doing it! Go Byron!