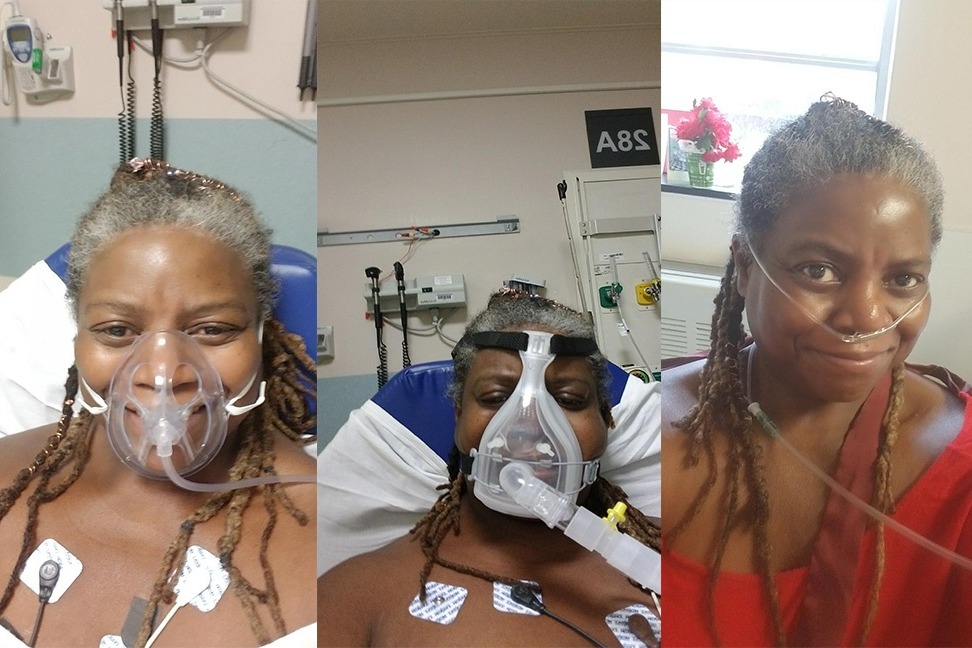 Imagine that you are a self-employed artist who creates Black rag dolls, dressed in clothing you design, some of which is made from beautiful African fabrics. You also operate a summer theatrical camp in Washington, D.C. for young people. You write children’s books based on the dolls’ brand, Sugarfoots. You have a son who is going back to college for his sophomore year later in the summer. And you just married for the second time, a wonderful man from Sierra Leon. Life is good.

Then suddenly, not long after you return to the U.S. from your wedding in Africa, you go into a prolonged coughing spell and you can’t breathe.

That’s what happened to Barbara Nyaliemaa Mosima this summer. She was rushed to a hospital emergency room and placed on an oxygen tank that she how has to have with her at all times. Her doctor told her that she had contracted something like pneumonia, and her lungs were 50% inflamed. She will get well, she was told, after a 72 week recovery. When you do the math, it works out to a year, five months, two weeks. That’s a long time to not be generating income.

Mosima has ventured out to sign up for food stamps and buy groceries, but something as routine as picking up some food feels like climbing Mount Everest, especially when one has to carry an oxygen tank around constantly. She has named it “Ralph.” She also has to take steroids to combat the lung inflamation. One of the side effects of steroids is weight gain. Getting around with a few extra pounds and an oxygen tank has got to be challenging

Then there’s the economics of getting sick. Mosima’s medical bills are mounting. Many Black folk don’t have the gold plated health insurance which covers every conceivable malady. Maybe she can get government disability, but there’s a wait for that. A long, excruciating wait.

She can summon energy to cook for herself. With “Ralph” by her side pumping air into her body, she has made vegetarian chili, cookies, tea.

Mosima’s husband Gabriel is stuck in Sierra Leone, waiting for his visa application to be approved. Maybe under another administration, not the one headed by the unpresident, he could get to the U.S. quickly to attend to his sick wife. But know how this administration feels about immigrants and refugees, especially those of color (See: Refugee children separated from parents and placed in cages).

She has established a Go Fund Me page, https://gofundme.com/it-took-my-breath-away And she’s raffling off many of her Sugarfoots dolls for $10. Raffle details are at www.sugarfoots.com She makes them herself, down to their outfits. She was looking forward to creating their clothes from material she had brought back from Sierra Leone.

Mosima blogs every day on her Facebook page, describing how she grapples with her new normal.

“I did not get to run my performing arts camp,” she writes. “I did not increase my income. I was told by my doctor I cannot work for several months, leaving me with no consistent income in sight. And I am sitting on a mountain of debt.

“All of this will one day dissipate. But as I go through the healing process, this will be the summer etched in my mind for many years to come.”

2 thoughts on “Breathless, or Help a Sistah Out!”