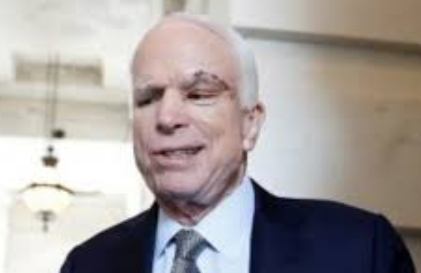 Many articles have been published about the late Senator John McCain’s heroism and integrity following his death at 81 on August 25 from brain cancer. But not everyone remembers the late Senator in this manner.

We people of color have always had to view individuals the nation designates as “heroes” with a degree of skepticism. Blindly trusting whites to stand by us was never an option. One could believe that a white person was an ally against racism, only to discover that, for whatever reason, the expressions of solidarity were only temporary.  When an inconsistent “ally” is an elected official with the power to enact laws or set policies that affect or control one’s life, people of color generally have to examine every utterance, every behavior of that individual, even if it seems inconsequential or unimportant to the majority population.

For example, there was the incident that took place during McCain’s 2008 Presidential campaign event, when a woman in the audience questioned the patriotism of then Democratic Presidential candidate Barack Obama. As the woman went on to say that Obama was an Arab, McCain cut off her rant, taking her microphone. “He’s a decent family man, citizen, that I just happen to have disagreements with on fundamental issues,” McCain said.

Huff Post guest writer Kelly Hayes of the Native American Menominee nation noted in a recent article that McCain passed up a teachable moment, in which he could have said that Arabs in the U.S. are citizens who work hard and support their country. Instead, she wrote, McCain “(positioned) an Arab  entity as existing in opposition to decency, a positive familial identity and U.S. citizenship.”

McCain was inconsistent in his support for civil rights. In 1983 he voted against a measure that established the national holiday honoring the late civil rights leader, Dr. Martin Luther King, Jr. Years later, McCain apologized for that vote. But he did not apologized for voting against the Civil Rights Act of 1990, upholding President Bush’s veto. The measure was a response to U.S. Supreme Court decisions which overturned a previous ruling that employers must prove how not hiring “minorities” was a valid business decision. McCain and President Bush claimed that the bill would result in hiring quotas.

There are Asian Americans who are still smarting from McCain’s seeming to refer to all  Asians as”gooks” 18 years ago. At the time, McCain claimed that he was only talking about his Vietcong captors who tortured him for the five years he was imprisoned during the Vietnam War.

Within weeks of making the slur, McCain apologized, according to the Washington Post. “I will continue to condemn those who unfairly mistreated us. But out of respect to a great number of people who I hold in very high regard, I will no longer use the term that has caused such discomfort. I deeply regret any pain I have caused .  .  . I renounce all language that is bigoted and offensive.”

“It doesn’t quite undo the pain,” wrote blogger Emil Guillermo, in a recent article posted on the Asian American Legal Defense and Education Fund website. “And surely, it didn’t alter the continued use in society of offensive ching-chong accents to diminish the status of Asians and Asian Americans.”

In yet another apology, McCain admitted to changing his position on whether the Confederate flag should be flown or forever taken down from the South Carolina statehouse in Columbia. The flag is a particularly horrifying symbol for Black people, who associate it with lynchings, the Ku Klux Klan, enslavement, and Southern racism. But McCain so desperately wanted to win the Presidency in 2000 that he said it was up to South Carolina to decide whether to continue flying the flag.

“.  .  . I should have done this earlier when an honest answer could have affected me personally,” McCain said in a speech before a conservative think tank, the South Carolina Policy Council. “I did not do so for one reason alone. I feared that if I answered honestly, I could not win the South Carolina primary. So I chose to compromise my principles. I broke my promise to always tell the truth.” McCain had lost the state’s primary anyway.

It’s good that McCain was willing to admit to, at the very least, some of his mistakes. It would have been wonderful if he had not made them in the first place, particularly as more than a few were apparently driven by political ambition. He should be remembered for his heroism as a prisoner of war.   But his blind spots regarding race should not be forgotten.