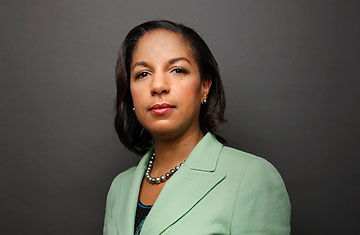 It’s not nice to mess with the unpresident. The latest example of his unleashing the vengeful side of his personality is his threat to revoke security clearances from 10 former Obama’s administration officials.

Among them is Susan Rice, a former national security adviser and U.S. Ambassador to the United Nations in the Obama Administration. Rice was the first Black woman and youngest person to be the U.S. United Nations Ambassador. Under the Clinton Administration she served as the Assistant Secretary of State for African Affairs.

In addition to her years of experience in international affairs and diplomacy, Rice was a graduate of Stanford University, a Rhodes scholar and a Phi Beta Kappa member.

Some observers have called her manner “brusque” and her policy recommendations  as a national security adviser and U.N. Ambassador were not always popular. But she knows her stuff, and isn’t afraid to publicly call out the unpresident and his current international advisers when she feels they’re falling short. That’s how she earned her place on the unpresident’s “enemy’s list”, comprised of Obama Administration officials. The unpresident has threatened to snatch their security clearance.

John Brennan, who was the CIA director under President Obama, was the first to lose his security clearance, for his, according to the unpresident, “wild outbursts” and “lies”. Brennan told a news conference that the unpresident’s quiescent behavior toward Russian leader Vladimir Putin during their meeting this summer was bordering on “treasonous.” Rice may have earned the unpresident’s anger when she wrote in a New York Times op ed column in which she said the U.S. gained little from the meeting with Putin.

A U.S. State Department spokesperson said that Saudi Arabia and Canada will have to work out their differences together as “We can’t do it for them.”

“This is the hallmark of the (administration’s) approach to violations of human rights, particularly when committed by autocratic friends,” Rice wrote. “In this instance, the administration left Canada swinging in the wind, gave Europeans cover to gaze at their feet rather than stand and be counted, and conveyed to Saudi Arabia and others that they can commit abuses without a word of concern, much less condemnation, from Washington.”

Words like these coming from a highly respected, highly educated Black woman who is exceptionally well versed in foreign policy must have really gotten under the unpresident’s skin. From previous indications we know that he likes women to be silent and non-assertive, and certainly not as smart, or smarter, than he. And he likes Black people even less.  But so far, Rice still has her security clearance, and the unpresident hasn’t attacked her in one of his vicious and inflammatory tweets.

Instead of alienating her, the unpresident should have enlisted her help with Melania Trump’s first ever visit to Africa in October. Since Rice has been an Assistant Secretary of State for African Affairs, she could have briefed Melania on the cultures and customs of the African countries she is scheduled to visit, and prevented her from making any embarrassing diplomatic mistakes. That opportunity is gone. It’s not nice to mess with Susan Rice.