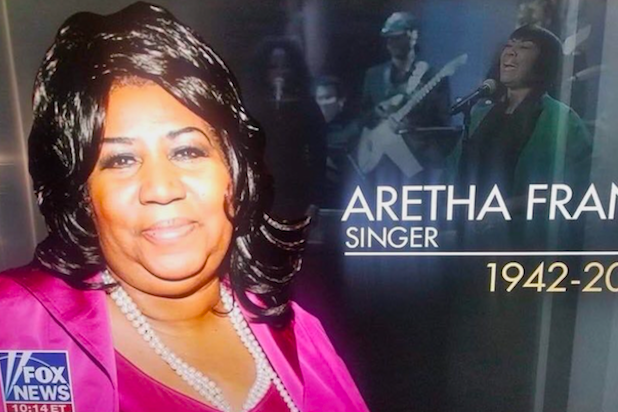 Everyone by now has read accounts of how Faux News’ (“faux” is French for false, and if there’s any news network that fits the description, it’s Fox) “tribute’ to Queen of Soul Aretha Franklin, who died August 16 at the age of 76,  included a photo of Franklin in the foreground, and in the background, an image of another venerated soul artist, Patti LaBelle, who was photographed singing in live performance. Fox indicated that both images were supposed to be of Franklin.

After Franklin’s fans threw a collective fit on social media, Faux News issued the following statement: “We sincerely apologize to Aretha Franklin’s family and friends. Our intention was to honor the icon using a secondary image of her performing with Patti LaBelle in the full screen graphic, but the image of Ms. Franklin was obscured in that process, which we deeply regret.”

Not for nothing is the network Faux News. The photo of LaBelle was taken during a White House performance which was part of a televised special entitled “Women of Soul: In Performance at the White House.” The program aired on PBS in 2014 and was hosted by President Obama. At no time during the program did Franklin and LaBelle sing together on the stage.

Sista Re has only been gone from us four days and already she has to endure an insult from Faux News. It’s an insult because any other news network would have been careful not to make such a glaringly avoidable mistake.

Most television newsrooms keep files on famous individuals, including their biographies and read- to-.air graphics of their faces. Everyone dies eventually, but when a newsmaker dies, it’s, well, NEWS. And television newsrooms prepare for that eventuality well in advance so as not to be caught flat-footed, as Faux News was. Which makes one wonder if it was really a “mistake” on Faux’s part, or carelessness.

People of color are underwhelmingly represented on the network. Even if it has people of color as news anchors, reporters, technicians, and in other positions, they are very few, a smaller percentage than their numbers in the general population. That should tell one something about the network. It could care less about representation of people of color in its newsroom, and even less about airing a correct tribute to a figure who meant so much to  so many, especially Black people.

Whoever put together the graphic of Franklin and LaBelle probably didn’t notice that they weren’t the same individual, and if he or she did notice, didn’t care enough to alter the graphic by editing out LaBelle’s image altogether, and inserting a photo of Franklin in performance instead. Maybe Faux was on deadline, about to broadcast Franklin’s death as its lead story, and didn’t have time to make the change.  Apparently, Faux News doesn’t have the time to be accurate where a story about a Black celebrity is concerned.

Perhaps the individual hoped that viewers wouldn’t see that the people in the graphic were entirely different individuals.  And anyway, don’t all Black people look alike?